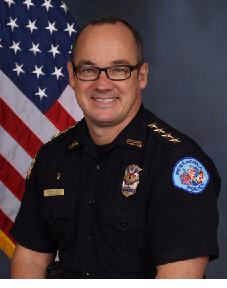 Tommi Lyter was appointed Chief of Police by Pensacola Mayor Ashton Hayward III on May 11, 2017.

He was named Acting Chief of the Pensacola Police Department on May 6, 2017, one day after the previous Chief of Police - David Alexander III - retired.

Chief Lyter began his career with the Pensacola Police Department when he was hired as a police officer in August 1990. He was promoted to sergeant in 2003, promoted to lieutenant in 2006, to captain in 2014, and to Assistant Chief on July 16, 2015.

Among his assignments have been Uniform Patrol, Investigations, Neighborhood Services, TAC, SWAT, K-9, Dive Team, and Field Training Officer. He has a Bachelor of Science Degree in Criminal Justice and a Master’s Degree in Public Administration. He also is a graduate of the FBI National Academy in Quantico, VA.